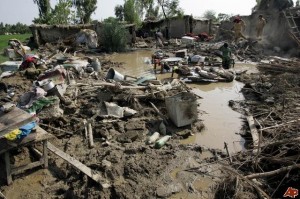 “As we traveled towards Noshera again, I reflected what I had seen on the previous visit to villages around Ahmanabad a few days before, it was about the worst the floods could get really, what else could water destroy?
The villages had been totally flattened, and as we gave money out “cash in hand” once again we heard the same predictable anger, “No Govt help, no money: nothing”.
We had driven to some camps and it was really complete sadness to see people reduced to this kind of life. We talk about poverty but seeing poverty, that is the real test. The poor always pay a heavy price, they never had anything in the first place, but they pay with their souls when these disasters come.

“I really hate money!” I think, as I walk through the camp and see elders dressed in an “undignified manner” in an air of stench. These noble human beings born into this world, with exactly the same ingredients which brought me into this world, have lived a life of improvised opportunities, many of them wasted into a life and cycle of “begging politics”.
Shameless words and sound-bite expectations from the political elites have always somehow kept these people praying for the day that their hardened lives will take “the promised turn” as they wait for the false promises, while politicians get fatter and fatter.
These people are the cause of this very profitable business of charity, a successful disaster economy and here in Pakistan it is the exposed, the poor are the perfect visuals to earn money from and they themselves receive hardly anything.
I love Pakistan but I hate this aspect with such venom I would think that a suicide mission would be absolutely justified against the people and institutes that benefit: maybe I get too emotional and that is supposedly a unprofessional weakness… or is it really?
I have to hold my soul steady as I see an old woman: frail, worn out, the lines on her thin features smile slyly, she wants that paper in my hand – I feel like a piece of shit – why should she even have to attempt to ask me? – We/I have no right to even expect her to live another night in this urine-stinking camp on the roadside.
“Here mother” I say to her: how dare I call her “mother” and then leave her to the open elements of a cold night underneath a dirty 8 by 8 cloth?

The children run around barefooted, beautiful technicolour of eyes and natural kaleidoscope of coloured hair, they smile and laugh as they collect cow dung and other tasteless stuff on their feet. Parasites find nice homes in their skin; lucky parasites. Yes, parasites is probably the correct word for those that sit on that money donated by millions as a sign of goodwill whilst mum and the old man worry that God may just send them to the other side for being poor.
“Lets Make Poverty History”, they f****** said a few years ago… I just heard that another Hellfire Missile had killed a bunch of people, another 80,000 dollars per missile…

“They can deliver bombs but they cannot deliver aid”.

The one exposing aspect of this natural disaster, that is very rarely (in fact never) talked about is the obscene racism against these Pathaan/Pushtaan people from many quarters – someone said to me “they are like leeches when you show them the money”; They obviously forget the many instances of looting etc in parts of the civilized world when disasters occur and they do not consider for a moment that they too would do the same if they were in this predicament.
We do what we are here to do: give money in hand and see some smiles and pat ourselves on the back and drive to the next town with the same stories being repeated, not being depressed but angry because I ask them do they know the Govt has “their” money and is sitting on it – they all know – do they know its “their” money not the Govt’s? Yes, they know…
“We are living worse than animals because we are waiting for that money. If we begin to re-build then when they come to look at the buildings they will say that they cannot see any damage so the money is not warranted, they will pocket the money, so we live in this misery.”
But the NGOs and Govt are using the “blockbuster disaster” to collect money… but none of the actors are getting paid!!!
I pray that this country can pick up the courage to run down that hill with a Molotov cocktail aimed at Zardari and those Parasites.

Wasim and his mother are absolutely impeccable, they have created these avenues for me to see the disaster in its true light and alongside the small contingent of volunteers who have relentlessly helped people, even to the embarrassment of the UN i.e. they helped them too –the Khidmet guys are there in the thick mud, alongside the elderly, the women, the widows, the children, the young and the middle aged – they are all human and they are not holding guns to people’s heads and chopping off hands, they are in real time helping people – BLESS THEM WHILST THEY CONTINUE THEIR WORK WITH DIGNITY.

BACK TO THE PRESENT…

I arrive in a place called Pir SABAQ – a town not a village – and I am just speechless; honestly, this place is the worst it could get, there is nothing to see but destruction. It was as if there was barbaric conflict here – no NGOs visible, no Govt visible – it is horrendous. This town was completely submerged in water; a small hill saved the people or there could have been a natural genocide here. I stand about 60 foot high from the river; the house behind me is completely destroyed…
“The water came around the town and back down here and took everything with it”.
Some say the houses were poorly constructed but when I point to the local school and the elegant villas, a silence falls. We sometimes want to blame the poor for their cheap houses yet the rich got this also; some of the rich are now back with the poor.
The waterline is invisible on the walls for some of the houses: “They must have been saved” I thought, but they were actually completely submerged: opening the gates to the entrance shows the evidence as thick mud once again is happily occupying every inch – it conquered as it sits there proud, reminding us all that however powerful we think we are, nature has no match.
The usual simple questions are asked, “Who has helped, has anyone been given money etc?” … the usual answers – NO NO NO !!!!!.
This place reminds me of the car scrapyards in Bradford, but this is humanity and how it looks, it is repulsive – thankfully they still have their own pride and are keeping themselves fed and clothed but they cannot rebuild until the officials come and they can get money to begin again.
I do not hold too much hope for those officials arriving…
The local mosque has got things under control and the Imam is making good progress at attempting to look after the widows and women who really have suffered. These Imams are usually displayed as “macho” etc., and not caring about women, but once again we see that generalizing is a dangerous occupation.
Small houses are being constructed for the women first: cheap, but it will be welcome as winter is only a few weeks away.
People really lost everything here, and as time goes on the breadwinners have nothing to work for: they too need help.
There is too much to see and too much pain to write about. Pakistan’s people have helped these people amazingly but Pakistan’s Govt, as they do in everything, have let them down.
As I get back to Rawalpindi, my thoughts heavy, I experience an earthquake… I switch the TV on and it says the disaster areas visited that day were also affected but thankfully it was not a full-on attack. What is happening to Pakistan?
I go out to clear my head – its 3.30 am and I can hear some people playing cricket and then I hear someone shout “NO BALL!!!!!!!!”

PLEASE HELP THROUGH THE RIGHT CHANNELS

LOVE ALL: LATER THERE MAY BE NONE!!